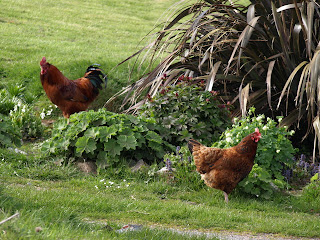 Adrian stepped out of the house and into ankle deep mist.

It had been raining for eight days - he was counting - but this morning had dawned clear and cool. There was a bite to the air that suggested a wave of cool weather was headed their way, which should mean an end to the rain. The chickens would appreciate it, he knew. Feathers aren't that comfortable when they're wet, judging by the stink-eye the hens had been giving him.


His mind was full of the things he needed to get done as he walked to the coop. Saturdays were his honey-do days, and his wife had given him a list of things to do that was just slightly longer than his arm. He didn't mind; there'd been a time when he thought a wife and family were far beyond his reach.

The hens flapped eagerly through the little door as soon as he lifted it, clearly eager to get started on their day.  Rosie, the biggest of the hens, flapped to the top of the metal bin holding their pellets.  Her look quite clearly indicated that he wasn't moving quickly enough for her taste.

"Alright, I'm getting to it!" He laughed and waved a hand to get her to move off the lid. He filled their feeder and checked that the watering unit was flowing freely. Some of the hens followed him out of the chicken run to start checking the yard and adjoining woods for the bugs they loved to catch.

Adrian was nearly to the door when an outraged squawk had him looking back.

Rosie was puffed up to almost twice her size, her wings half-spread, and the rest of the free-ranging chickens ranged behind her in an odd kind of chicken formation.

"Rosie?  What's up with you girls this morning?"  Unease shivered down his spine, and he paused long enough to grab the broom they kept on the patio before he walked slowly back to where the chickens were apparently facing off with a cluster of trees.

There's probably a raccoon or something in there, he thought, trying to convince himself that he was overreacting.  As he reached the chickens they parted to let him through without taking their eyes off the woods.

Adrian stood next to Rosie and stared at the woods, debating his next move. If it was an animal, he'd feel pretty stupid...but he didn't think it was an animal. He shared a look with the hen next to him and stepped closer to the line of trees.

The clear, cool morning froze in an expectant silence.

"If I come out, you're not gonna brain me with that broom...are ya?"

Adrian lowered the broom and his head, relief and anxiety warring for control.

"Bri?  Jesus, Brian!  What the hell are you doing in my woods?" He watched his childhood friend make his way out of the woods with all the grace of a man born and raised in the asphalt jungle. Burrs stuck to his pants and there was a small branch dangling from his hair.

Brian shrugged thin shoulders and grinned, shooting Adrian back to high school in an instant.  "You know, thought I'd look you up. Haven't seen ya in a while."

Adrian leaned on the broom and shook his head. "I'm not buyin' that 'old home' crap Bri.  What's up?"

"Well, shit. You always were quick." He looked around and stepped a little closer. "I gotta job and I could use your...talents."

"No." His response was instant and unequivocal. "Dammit Bri I'm retired.  I got a wife and a kid."

A laugh escaped before Adrian could stop it. "Seriously Brian. I'm out of that for good, whatever it is. And don't tell me what it is!" he interrupted as his friend opened his mouth.

Brian tugged at his lower lip and frowned.

"Come on Adrian.  You're raisin' chickens here.  Seriously?  What you got here is actual chicken shit!  I'm tellin' you I can get you a lot more than this."

Adrian stepped closer to his old friend and slung an arm over his shoulders. "What I've got here is a lot more than anything you got in the pipeline, Bri.  I got a family...a home. And that ain't chicken scratch, believe me. Come on into the house and meet the wife - she makes a mean waffle."

Brian shook his head and stepped back, and Adrian saw regret flit across his narrow face. "Naw, bro.  I gotta jam, but thanks anyway."

Rosie and the rest of the chickens had gone back to their fowl pursuits, ignoring the man walking back toward the woods. Adrian watched his friend, and wished he didn't feel relieved that he was watching his past walk away.
0 comments