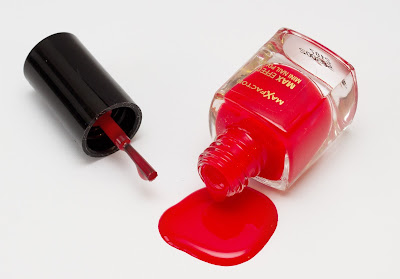 She bent her head closer to where her hand was splayed on the metal vanity, the ridiculously tiny cap and brush clutched in her left hand, breathing in the strong fumes from the nail polish a few inches away.

The left hand was never a problem. Somehow the cap holding the tiny brush was bigger when her dominant right hand held it. The dark red polish went on smoothly and evenly. The bold color standing out against her pale skin.

Her right hand was another story. No matter how slowly she went, how careful she was, the polish was uneven and streaky. It was also on the skin around her nails, and she knew from sad experience that trying to fix that would only end in tears.

Her hand jerked and the bottle of red polish tipped at the brush of her fingers. In excruciatingly slow motion she saw it begin to topple, and her right hand lift from the table to catch it in ill-fated reflex. The spread of the thick polish was slow, and looked a little too much like blood for her comfort.

"Damn it!" The squeaky floorboard just outside their bedroom door sounded, and Leanne spoke without looking over her shoulder. "Bring me some paper towels, would you? I've spilled the nail polish."

Dave didn't say anything, but she heard him open the door to the closet in the hallway. While he retrieved the roll, she put the cap back on the nail polish and moved it out of the way. Two paper towels appeared over her shoulder and she took one to mop up the worst of it. He crouched next to her and soaked part of the other paper towel in acetone to finish the job.

By the time the puddle of red was taken care of, even the nails on her left hand were smeared and covered in bits of paper towel.

"Leanne, we're going to be late if we don't get going."

"I know, I just wanted..." she waved her hands, smeared with dark red polish.

"To look like you just gutted a baby rabbit?"

Leanne's mouth dropped open in shock and she stared at her hands. "Oh God, you're right. I do look like I've..." A snort surprised her and made them both laugh.

Dave grabbed a couple of cotton balls and soaked them in acetone and started gently wiping her fingers clean. "I have to admit it's a look. I'm sure everyone at the banquet would be impressed. Well, impressed and worried." He glanced up and smiled, and her heart jumped just like it had every time since the first day they'd met.

"I wanted to look nice tonight, when they gave you the award. My nails are so weak right now, and they've turned that awful color. I should have just gone to a salon and had them done."

He kissed her fingertips and pulled her to her feet, guiding her to the full-length mirror next to the door. She looked at their reflection. He stood behind her with his hands on her shoulders, more than six inches taller, with a swimmer's lithe body and dark hair that waved back from his face with just a little gray at the temples. The open, smiling face that made his patients trust him when they were at their worst was more familiar than her own, these days.

Her eyes tracked reluctantly down to the stranger standing in front of her husband. A short cap of silver hair highlighted cheek bones that were a little too sharp, a body thin enough to be frail, and the straight fall of silky fabric where once there had been curves.

"You sparkle, Leanne. Why polish a diamond?"

Their eyes met in the mirror, and in his she saw the beauty she couldn't see with her own. She let him tug her down the stairs to the waiting car.

"So what's on the menu tonight?" she asked as she slid onto the seat he'd warmed for her.

Her husband shot her a look. After thirty years of marriage she knew that look meant that whatever was about to come out of his mouth would be outrageous.  She wasn't disappointed.