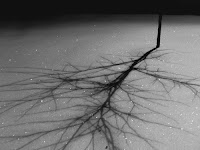 Light is different in the fall.  It’s somehow weaker, and the shadows are longer and emaciated in that strangely frail light.  The smell of the wood fires burning adds a bite to the early evening air.
When the shadows started chasing me home from school, I started thinking about Halloween.

For years, the end of October was all about the candy.  We would stay out as late as we could, and then come home and listen to whatever creepy radio play our local station was presenting.

Then, about the time I was twelve, there was a haunted house.  I wanted to help, but I wasn’t comfortable popping out at people.  One of the adults suggested that I play the part of the gypsy woman in the room where the groups waited to begin.  All I had to do was tell a ghost story to keep them busy until the guide came back to get them. 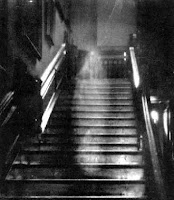 The first group came in, and I started my tale…an old one about two teenagers in a car and a maniac with a hook.  Without thinking, I made changes to the parts I didn’t think were scary enough as I spoke.  I realized that the group that had been clustered loosely around the room had begun moving closer and closer to each other.

At the climax of the story I’d made my own, one of the guides burst through the door…and my audience screamed and scrambled back.

It was an epiphany.

For the most part, I was an awkward, shy kid.  I always felt out of step with the world – I just didn’t seem to fit.  I realized that while I couldn’t change myself to match the world, I could tell a story that changed the world to match me… just for a moment.

This post is in response to a prompt from Write on Edge - we were supposed to write about what fall makes us think of in 300 words or less.  Every year, as fall approaches, I remember that basement room where I told my first ghost story...and the thrill of sucking total strangers into the world I created.  Thanks for stopping by, and please let me know what you think in the comments!

Email ThisBlogThis!Share to TwitterShare to FacebookShare to Pinterest
Labels: RemembeRED, Write On Edge