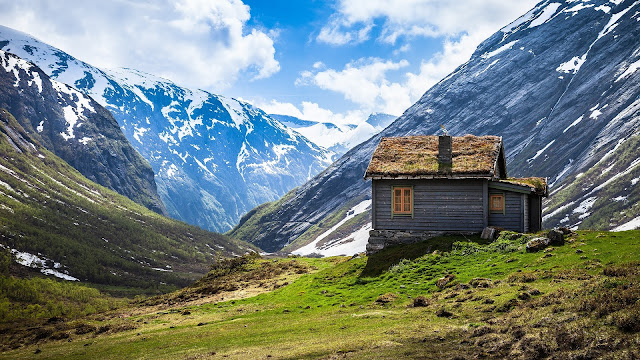 Climbing up on the roof of the cabin wasn't Eideard's favorite task, but he'd learned the hard way that failing to care for the sod covered roof would have unpleasant consequences. If he'd been the one to build the cabin, he'd have used a more traditional roof. Still, it was surprisingly good at keeping the cabin a constant temperature.

When they'd first found the cabin, Iona had joked that she was going to plant a garden up there and grow the herbs she liked to use for cooking. They'd both pretended the move was temporary, so they could joke about things like that. The jokes didn't make it through the first winter. Iona hadn't made it through the second.

Kneeling, Eideard worked his way over the roof and checked for damaged sections that might need replacing. The pitch of the roof was just enough that sliding off was a real concern. Unbidden, a mental image of himself lying on the rocky ground next to the cabin, various limbs twisted unnaturally, popped into his head.

The last winter had been long and his mind had started supplying him with all manner of scenarios that would result in his death. If he slipped on the rocks near the river while fishing, he could drown. If a bear or pack of wolves caught him unaware while he was checking traps, they could attack him. There were a lot of ways to die, alone in the mountains.

That these images were increasing in frequency didn't bother him nearly as much as the realization that they were starting to feel more like fantasizing than worrying.

He sat at the top of the roof and leaned against the chimney, warm from the banked fire in the hearth below. The snow hadn't fully melted yet, but the days had stayed warm long enough to create a strong runoff in the stream near the cabin, and in the river that supplied the fish he ate.

His wife's voice came to him like the images did; the unwanted and alluring tangled together in a messy knot. He knew she wasn't there. She hadn't been there for two years.

"Stop ignoring me! This is important, Eideard."

He closed his eyes and heard his answer. "I am listening, and I'm not ignoring you Iona. I just think you're overreacting, that's all."

"And you're in denial. Things aren't getting better, and we're too cut off here if there's real trouble. We need to talk about finding a town somewhere."

Her slender hands rested on slim hips, and a thick blonde braid lay over her shoulder to brush against her fingertips. Eideard's fingers twitched, longing to tug the ends of that sunny rope.

"It's not any better in the towns, you know that," he could hear the exasperation in his voice, and cringed.

"No," he'd rushed to cut her off. "No one knows we're here, no one would have any reason to come this high into the mountains. We've got the traps, good fishing, your garden...we even have the solar panels. We've got everything we need here."

He'd wanted so badly to be right, to be the one that made them safe when the rest of the world was caught up in hatred and violence.  He should have known better. Iona was never wrong; she had a knack for lining up the facts and evaluating them without bias that he envied. It was one of the many things that he loved about her, that quick and precise mind.

He opened his eyes and stared at the mountains circling the cabin. An ancient battlement taller than any built by men, impervious to everything but time. Strong and forbidding, but not enough to protect what he cherished most.

Flashes of purple in the meadow just below the tree line caught his eye. The pasqueflowers had returned, their lavender petals offering the first touches of color after the unrelenting winter. Bright and hardy, and Iona's favorite.

Eideard turned and slid slowly toward the edge of the roof and the ladder he'd propped there. The image of his broken body floated in front of him, and he brushed it away as he climbed carefully down.

The grave needed flowers, and those were her favorite.