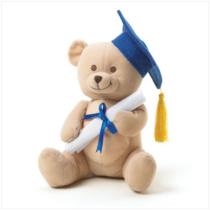 “Corey* you stop messing with that robe!”
I watched as the teacher of our four-year-old classroom moved the boy’s pudgy hands away from his zipper for the third time.  I could smell that special mélange that only children can produce – part crayons, part tempura paint, part plastic doll – and I tried to stifle my impatience.
I was new to all this.  Back home, in Wyoming, you graduated from high school.  If you had an ounce of drive you graduated from college.  You most certainly didn’t “graduate” from pre-school.
“Seriously?” I thought to myself.  “What’s the big deal?  Congratulations!  We’ve mostly taught you not to eat the crayons?”
I moved into action when little Cory reached for his zipper again.  We’d had to special-order his robe – he was bigger around than he was tall – so if he broke that zipper we were screwed.
“Hey Corey, show me your fingers…I think you’re missing one!”  I knelt next to the Little Debbie-scented boy and held my hands out.  He giggled and laid his smaller hands in mine so I could count them.
By the end of the day I’d watched seven incomplete graduation rehearsals, and I never wanted to hear “Pomp and Circumstance” ever again.
“Hey hon!  How’d the rehearsals go?” Dan asked me as I came through the door and collapsed on the sofa.
“Just shoot me.  It’ll be a mercy killing.”  I was almost kidding.
“Yeah, I’m pretty sure I’m not cut out for jail.  Sorry.”  He was right.  Adorable nerdy guys are probably like pixie sticks in jail.  “Do you want to eat before we head over?”
I thought about it.  The space we’d rented for our “graduation” was downtown.  Parking would be hell, and we’d probably have to pay for it.  “Let’s eat on the way, it’ll be faster.”
“Fine, but you’ll have to get ready right now or we’ll run out of time.”  Dan started pulling on my hand.
“I don’t want to.  Why…just tell me why are we “graduating” four-year-olds?”  I could hear the whine in my voice and I didn’t care.
One cheeseburger and a parking meter later, we were walking into the blissfully cool air-conditioning of the rented hall.  I left my husband to fend for himself in the rows of chairs and excited strangers and went to the back room to help get the kids ready.  I stopped at the door to take a breath and paste on my best Assistant Director smile.
A tiny sea of blue mortar boards milled aimlessly around the room, and last minute adjustments were being made.  As I bent to pin a cap on one small girl, I realized her hair had been styled at a salon that afternoon.  All of the girls had their hair done.  And the boys were wearing suits that still had creases in them.
“Ma’am?”  I turned to face the mother who’d spoken from behind me.  “They’re gonna play the song, right?”
“You mean, Pomp and Circumstance?”
“I guess…the graduation song, right?”  I nodded and her smile burst out.  “Nobody in my family ever graduated nothin’ before.  I wanna make sure I get it on the camera!”
My heart broke – this wasn’t Wyoming.  This was a big deal, because for too many of them this was it.  They wouldn’t hear that song played for their high school graduation because they wouldn’t make it that far.
When the CD played the opening bars through the sound system I watched twenty proudly beaming faces march to the risers for their graduation, and wondered which lucky few would get to hear Pomp and Circumstance again.
*Name changed to protect the sticky
This post is a response to a prompt from The Red Dress Club .  The assignment was to write about a memory of a graduation.  I thought about sweating my way through my high school graduation, and sweating my way through my husband's college graduation, and sweating my way through my son's high school graduation.  But the most vivid memory I had was of a graduation that brought home to me how much I took for granted.  As always, comments are very welcome!