This post is a continuation of Persephone's Tears - you may want to pop back and read that story first! 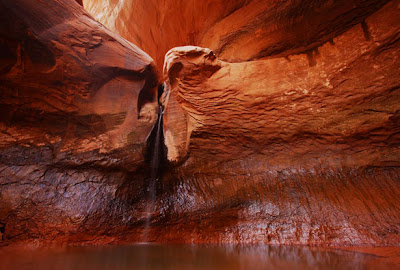 Anise climbed out of the shaft carefully, pulling the heavy skid up behind her.  The water beginning to flow in through the opening helped the skid glide more easily over the loose rock.  If she’d taken any longer in the shaft, she would have been forced to leave it behind.
Once she was clear of the rocky coast, the skid moved freely on the ever-present red sand that covered most of Persephone.  She made a wide circle to approach the mining camp from the south.  It wasn’t likely that any of her fellow miners would be interested in the natural shafts that dotted the coast, but there was no sense in taking that chance.
Anise could feel the small packet she’d placed those three precious Tears in pressing against the underside of her breast as she walked.  She needed to get into town, to give the stones directly to the government assayer. The assayer was a construct—a robot designed to look enough like a human to make people comfortable dealing with it.  It was incapable of cheating or giving short value to a find, and the credit was uploaded to the government network immediately.  Her indenture would be paid the moment the transaction was completed.
“Hey girlie!  You gonna skip getting’ paid today?”  The rough voice sounded in her ear, and Anise had to fight to keep her hand from checking the hidden packet.
“Not a chance, Piggen.  I figure I got enough for a bowl of soup,” she replied calmly, turning toward the assayer’s tent.  The man lounging inside would have tested the four-hundred pound weight limit on her skid.  Bathing facilities were in short supply out in the mining camps, but Piggen was filthy even by their standards.
“Ha!  We’ll see about that!”  His thick hands made quick work of the haul in the skid, sorting the contents by relative value according to the current market.
Anise struggled to hold her tongue when she saw him place several stones of moderate value in the lower value bins. Unlike the miners, Piggen wasn’t there to work off a debt.  Rumor had it he’d been given a life sentence (for what wasn’t known), and he was serving it out on Persephone.  One thing was certain, if he wasn’t getting off Persephone, neither was anyone else.  Not one miner in their camp had ever managed to earn enough to go home on Piggen’s assays.
When he handed her just enough credits to buy a ration bar—the cheapest food option offered to the miners, and despised for its awful taste—the look in his eye dared her to complain about the short value he’d given her find.
“Thanks, Piggen!” she chirped with false cheer, and had the pleasure of seeing a flash of confusion cross his flushed face.
“No doubt about it,” she thought as she dragged the skid to her tiny tent at the edge of camp.  “Gotta find a way into town if I want to go home.”
This post is in response to a prompt from Write On Edge to write about an Anti-Hero.  I liked Anise when I wrote about her the first time, and I decided that she really needed an Anti-Hero.  Thanks for stopping in to read, and please leave a comment below!