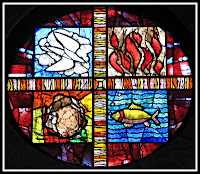 The heat in the little church was oppressive, and Nora was already regretting the prideful impulse that compelled her to squeeze into her Spanx.  Her backside was itching already, and Pastor Lang wasn’t even done with his first story yet.

Pride went before a fall.

That was in Proverbs, wasn’t it?  Nora forced herself to sit a little straighter, and made another attempt to focus on the sermon.  The pastor was still telling one of his stories; they were supposed to illustrate the message of the sermon, but sometimes it seemed like they were just stories, and Nora was hard-pressed to make the connection.  She shifted slightly, wishing she could scratch where it itched.

Home is where you can scratch where it itches.

She’d seen that on a shirt at Wal-Mart a while back.  It seemed a little crude at the time, but right now she could relate.

Her husband shot her a look out of the corner of his eye.

How did he always know when her mind was wandering?

Oh.  Her hand had snuck down to a spot just behind her hip and was scratching quietly.  She blushed a little and smiled sheepishly at him, sliding her wayward hand back to the Bible on her lap.

And she’d missed the pastor’s transition into his actual sermon.  Nora re-crossed her legs and focused on the pastor’s voice.  He was getting worked up about something.  Apparently he was worried that people weren’t taking their salvation seriously, and that sort of thing leads to the hot place.

The road to hell was paved with good intentions.

Like that time the youth group decided to go to the store and help elderly people load their groceries in their cars.  Turns out the elderly are pretty paranoid about getting mugged these days.  It took one of the town’s police officers, a sheriff’s deputy, and the pastor to smooth things over.

‘Course, it occurred to her that some of the youth, her own son included, did look more like muggers than missionaries most of the time.  Nora caught herself before she snorted, and hauled her wandering mind back to the sermon.

Another story.  Possibly about hunting, but she couldn’t be sure.  The Lord knew their pastor sure did like to hunt.

Whatsoever you do to the least of these, you do to me.

Nora wondered how God felt about hunting.  They taught the kids in Sunday school not to be mean to little animals because they were part of God’s creation too.  Seemed like stalking a deer in the forest and then killing it when the poor thing least expected it wasn’t a very Christian thing to do.

Then again, some people did it so they’d have food to feed their family.  That was probably OK.  But then again, you could say that it was OK to steal food to feed your family, if you were going to make excuses.  It sure seemed like people were awfully ready to make excuses about what they did that they shouldn’t have.

Nora jumped when her husband’s hand came down on her shoulder.  The rest of the congregation was standing and singing.  She’d missed the entire sermon.