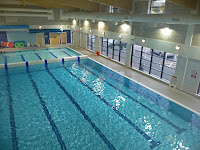 The elderly woman at the counter didn’t glance up from her romance novel.  She never did, but Sam greeted her every morning anyway.  Shrugging, she keyed in her membership code and turned up the long hallway to the locker room.

The YMCA had made some effort to brighten up the gray little area, so the lockers were now painted a variety of primary colors.  Nothing could be done about the cinder block walls, though.  Or the damp, chemical smell that united all locker rooms and made them familiar.

Sam trudged to the last row of lockers, closest to both the swimming pool entrance and the showers.

Sam’s head jerked up in surprise at the chirped greeting.  A woman smiled at her from halfway down the row of lockers.

“Good morning,” Sam responded, out of habit.  She shuffled down to an empty locker and set her bag down on the bench, keeping an eye on the interloper a few lockers down.

To her relief, the woman turned back to her open locker and began to strip off her clothes with a casual confidence Sam couldn’t help but admire.  They were the same age, but the skin-tight swim suit the other woman was pulling on slid over a body that didn’t look like it had ever seen 110 pounds, never mind the 250 Sam admitted to.

Knowing it was stupid, she waited until the room was empty to undress and struggle into her suit.  Sam pushed through the door to the pool, her towel carefully wrapped around her bulk.

“Hi Sam!”  The cheerful voice of the lifeguard greeted her.  “You’ve got company today!”

Sam winced and looked toward the water, where the woman had already lowered her slender body into the cool water.  As she and the lifeguard watched, the stranger pushed off and began swimming toward the other end, awkwardly slapping the water and lifting her head out of the water with every stroke.

“Hope I don’t have to pull her out,” the lifeguard commented, grinning at Sam.  “Don’t have to worry about that with you!”

Sam grinned back, and dropped the towel to slide into the welcoming arms of the water.  Freed from the gravity that made her bulk a graceless prison, she cut through the water cleanly, propelling herself past the other woman with ease as she settled into the smooth rhythm of her workout.

This post is my response to a prompt from Write On Edge - we were to write about freedom, in a way that makes sense to us, and keeping it to 400 words.  For me, being in the water is more natural than walking on land.  On land I'm clumsy, self-conscious, and hopelessly uncoordinated.  In the water, I am free.  I swam competitively for most of my childhood and teen years (although I switched to water polo in high school), and in the water is the one place where my body actually does what it's told.

Thank you for stopping by, and please leave a comment so I know you were here!