Three days to Halloween, four women dead, a killer on the loose, and she was wandering around a quilt show.

Breena shifted her purse and looked around for her sister while she dug out her cell phone.  She still had interviews to read from the latest murder and Kelly was nowhere to be found.

Eyes still scanning the artificial hallways created by yards and yards of colorful fabric, she dialed her sister’s cell number and started walking toward the featured artist’s quilts on a low stage near the entrance.  The ringing in her ear wasn’t matched by a ring echoing through the hushed space.

Breena frowned and waited for her Kelly’s voice to finish asking her to leave a message.

“Yeah, Kelly.  I can’t find you, and I’ve got to get back to work.  Meet me next to the stage, would ya?”  She knew her voice was annoyed, and she didn’t care.  She was annoyed, damn it.  Kelly had promised they’d only stay an hour, and it had nearly been two.

They’d stopped at the display when they’d arrived, and Kelly had gushed about the designer.

“He’s so talented!  Everything he does is completely unique!”

Breena wasn’t sure what the big deal was – it all looked like a bunch of children’s building blocks sewn together to her.  A price tag caught her trained eye as she passed a large quilt made entirely of sharp points in various shades of blue.  Four hundred dollars for a blanket she’d be terrified to use.  No thank you, she thought, and kept going.

When her phone vibrated against her hip, Breena stopped to check the text message coming through.  The crime scene report was back.

She sighed and looked up, frustrated.

The display ahead of her swam into focus.

All of the quilts looked like eyes to her.

Mildly creeped out, she stepped back and took another look.

Definitely eyes, somehow familiar.  Breena lowered her phone and stared hard at the quilts, trying to focus on the elusive memory they triggered.  She scanned all five quilts one by one, before stopping on the last one.

Kelly’s eyes.  The last quilt was Kelly’s eyes, and the rest matched the eyes of the four women in the morgue.

Breena staggered, her breath whistling out in fear as she reached for her phone, desperate to hear her sister’s voice. 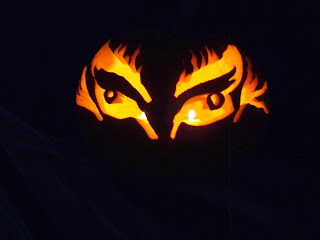 This post is my response to a prompt from Write On Edge to write a Halloween story in 400 words or less.  It was inspired by a friend on Facebook who designs quilts, but is not a serial killer.  At least as far as I know, at any rate!  Thank you for stopping by and let me know what you think in the comments!

Email ThisBlogThis!Share to TwitterShare to FacebookShare to Pinterest
Labels: Fiction, Write On Edge