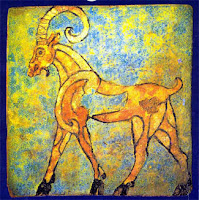 Did you know that goats are believed to have been the earliest animal humans domesticated? Charities give goats to communities because they’re easier and cheaper than cattle to keep, and incredibly useful…dead or alive. Aside from meat, they give particularly nutritious milk, their dung can be used for fuel, their bones, hair, and sinew can be used to make clothing, building materials, and tools, their hide was used to make water and wine bottles and parchment, and their intestines are used to make surgical sutures.
In the Bible, they’re considered a clean animal, and they’d be slaughtered for an honored guest. They were used as sacrifices - on Yom Kippur in the Jewish tradition, two goats were chosen and lots were drawn. One would be sacrificed, and the other allowed to escape. Goat hair curtains were used in the tent that housed the tabernacle, and their horns could be used to make the shofar, a horn used in Jewish ceremonies.
Goats are intelligent and independent. They don’t need much watching over because they’re quite good at taking care of themselves.
Sheep, on the other hand, are every bit as useful as goats - in fact, it can be quite difficult to tell some breeds of sheep and goats apart - but they definitely need watching over. They have a reputation for being mindless followers, who don’t often think for themselves. In “Wee Free Men,” written by one of my favorite authors, Terry Pratchett, one of the characters refer to sheep as, “just bags of bones, eyeballs, and teeth, lookin’ for new ways to die.”
Right about now, I’m thinking that being a goat sounds like a good thing. We value independence and self-sufficiency. Combine that with usefulness, and you have the model of a contributing member of our society. An admirable person.

But our scripture today is pretty clear about what happens to goats - they go to hell. Why? If goats and sheep are virtually identical, what is it about being a goat that is so bad it deserves being called cursed and consigned to “the eternal fire prepared for the devil and his angels?” Good question.
I had two friends in junior high and high school. Jenny and Shelley. They were twins. When I met them, on the first day of eighth grade, they were sitting at the table just in front of me. It was my first day in a new school, in a new state, and I was working on being as miserable as possible.
These two girls sitting in front of me turn around to face me at the same time, and suddenly I was looking at mirror images. I couldn’t tell them apart. They looked the same. They talked the same. They didn’t wear the same clothes at the same time, but they shared their clothes so that was no help at all. I got around the fact that I couldn’t tell them apart by simply never calling them by name.
Then, after a while, I could tell them apart.
It was little things. I noticed that if someone dropped their books, one of the twins would rush to help. The other one would laugh…then help. I noticed that if someone we knew changed their hair or showed up with a new jacket or purse, one twin never noticed unless it was pointed out but the other twin always noticed. One held her head differently when she listened to you. One had a habit of nodding if she agreed with whatever you were saying. Little things, but they were differences.
They were different people. No matter what else about them was the same, they were still different people, and they approached the world from slightly different angles. As small as those differences were, it was enough to tell them apart as I spent more time with them. It was enough for me to start to prefer spending time with one over the other. By the time we graduated from high school together, it was so easy for me to tell them apart that it was hard to remember a time when I couldn’t do it.
It’s the differences that matter. No matter how alike sheep and goats are, it’s the differences that matter in this scripture.
Most of the time, we hear this scripture when it’s time to contribute to mission funds and food drives and prison ministries. It’s a good one, and well-known because of it, but it has another side…another angle.
This scripture is not just about how we treat the people around us, it’s also about how we respond God’s Word and the people who bring it to us. Remember in the scripture, BOTH the sheep and the goats came to Jesus. Until He divided them, they were one flock. One congregation. They all followed Jesus.
They were the same - twins in their faith. But Jesus looked at them and immediately saw the differences.
The goats believed the same things the sheep did, and they were part of same congregation as the sheep, but just like my friends from school, it was their behavior that set them apart. Remember when I said that sheep and goats can be hard to tell apart? That’s true in church too. In fact, it can be so hard to tell a sheep from a goat, that you might not even be able to tell which one you are yourself. 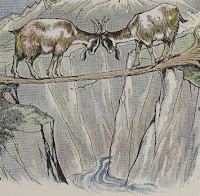 Goats have heads like rocks, and they will slam their heads up against just about anything. They almost seem to enjoy it! And you never want to turn your back on a goat. They won’t always butt you in the behind, but when they do you’ll be feeling it for days!
People acting like goats will butt heads. Anything up for discussion is worth arguing about, any decision is worth criticizing. Sometimes, they’ll act supportive and wait until backs are turned to strike. That’s not to say things don’t need to be discussed or even argued…they do! But if all you do is argue and criticize without suggesting an alternate solution, or if the only solution you’re willing to discuss is your own…well then, you might be a goat.

Goats have a reputation for eating just about anything. That’s not entirely true. They will taste anything, just to see if they like it…and sometimes that leads them to eat things they probably shouldn’t, and then they don’t eat the things they should.
People acting like goats are attracted to things that don’t feed their souls, and ignore the things that will. We say we don’t have time for daily devotion - but it takes, ironically enough, an act of God to make us miss our favorite TV show…or tear us away from our computers and cell phones. We don’t have enough money to tithe what we should, but we do have enough to pay for the data plan on our smart phone, or go to the beach for a weekend, or buy our lunch instead of packing one. If you can find a way to be home every Wednesday night to watch Survivor, if you can find the money to buy lunch, but you can’t find time for Bible study or you can’t find the money in your budget for a tithe…well then, you might be a goat. 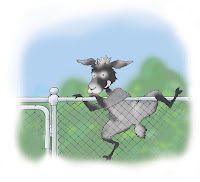 Goats are escape artists. They will find a weakness and exploit it until they can escape the safety and security of their fence. People who keep goats can find themselves going out to look for escapees at all hours. They also find themselves mending a lot of fences.
People acting like goats are always looking for a weakness to exploit so they can leave. They’ll collect slights and hurts like precious gems until they have enough to justify leaving. If they don’t agree with what the pastor says on Sunday morning, or how they do visitation, they’ll avoid coming to church, or hold back their tithe, or just find a new church they think will suit them better. Goats don’t try to repair the fence, they just keep working at it until the hole is big enough to let them leave. And they leave others to mend the fences they broke. If you find yourself complaining about things you don’t like, but not doing anything constructive to fix the problem…well then, you might be a goat.
Maybe we don’t want to be a goat, but we’re not really comfortable as sheep, are we?  We don’t want to be mindless followers, who can’t think for themselves.
So it’s a good thing that sheep aren’t actually stupid, isn’t it? On the barnyard scale, pigs typically represent the geniuses of the farm, but sheep come in a close second. It’s easy to mistake sheep behavior for stupidity, and I know that’s their reputation. For people outside the church, that’s our reputation too - we can’t be bothered to think for ourselves. We come to church so we can be told what to think and how to act. 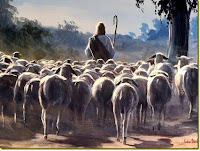 Being a sheep doesn’t mean that we stop thinking for ourselves. It means that we recognize that we need to do more than just say we follow Jesus…we have to actually follow, and that means allowing ourselves to be led. We recognize that we are stronger as a congregation than we are alone. We allow God’s Word to shepherd us, guide us through the decisions we make.
When we are sheep, feeding the hungry, clothing the naked, taking care of the sick, and visiting the imprisoned come naturally. Problems that get in the way of serving are addressed and resolved as a group. Goats can’t get those things done, because they’re too busy being goats.
But again, remember that both sheep and goats were members of the same flock in our scripture today. Just coming to church, being a member of a congregation and hearing God’s Word, doesn’t make you a sheep instead of a goat. Your actions do.
No matter how often you hear God’s Word, if you fail to act on it - at home, at work, at church - you are being a goat. And it doesn’t matter what your reasons for being a goat are. Jesus didn’t ask the goats why acted the way they did. What matters is that if you are being a goat you are not being a sheep. You are not living your life as a follower of Christ and there are clear consequences for that.
We are all goats in one way or another, that’s human nature. We are goats at home, we are goats on the road, we are goats at work, we are goats at church. We don’t have to be. We can overcome that nature to be the sheep who are willing, not only to hear God’s Word, but to live by it and allow it to guide our actions.
Today is the first day of 2012. A new beginning. We are told we should begin as we mean to go on. So let’s begin. Take a hard look at yourself today. Are you butting heads instead of working as part of the group? Are you spending more time with your computer than you are with God? Are you giving more money to your cell phone company than you put in the plate on Sunday morning? Are you so busy looking for a reason to be unhappy that you miss the moments of joy? Are you tearing down fences, or mending them? 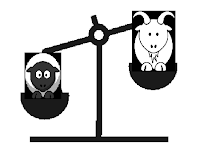 What will you be in 2012? Personally, I’m hoping to be less goat, more sheep. I hope you’ll join me.