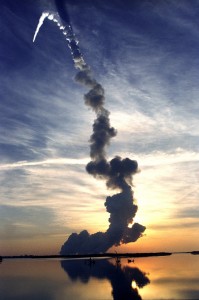 When the ground rumbled under her feet, Paige didn't even bother looking up.  The launches were daily now; rats fleeing a sinking ship.  Or in this case, a civilization fleeing yet another planet they'd managed to destroy.

This was the fourth planet the human race had colonized since leaving Earth; that exodus had been so long ago that the number was meaningless.  Besides, each new planet had brought with it a new measure of time.  Paige had managed to work out a relative time line by researching the meteorological records that had been kept on each planet.  It had been an ambitious project and her mentor had advised against starting it.

"What's the point?" he'd asked.  "How do records from other planets apply to this planet?"

She'd pushed it, and he'd eventually given in, throwing  up his hands and waving her off in the direction of the massive archives that had been created on Earth and updated and transported to each new planet.  Technology had advanced, of course, but the basic concepts had remained the same.  The sheer volume of information had been nearly overwhelming, at first.

Twelve years into her project, Paige started to see the beginnings of a pattern emerge.  A pattern that alarmed her and gave her a sense of urgency to complete assimilating the data.  When it was complete, the report was massive - after all, it included every weather report and study done on every planet they'd ever colonized.  She presented it at the annual conference, and was roundly ridiculed.

This wasn't new, they told her.  Everyone knew what had happened on those previous planets, the mistakes that had been made.  Safeguards had been put in place on Caesar Prime to ensure that the environmental issues that had driven their species across the galaxy like gypsies would never happen again.

Paige shook her head and hurried across the parking lot to her office.  The Center for Atmospheric Sciences was nearly empty, so she could walk in a straight line from the transpo stop to the front door.  She spared one glance at the dark blue sky before pushing through the heavy glass door and into the cool comfort of the lobby.

They'd lived on Caesar Prime for almost fifteen full generations; so little time, geologically speaking, and yet plenty of time for them to repeat mistakes they'd sworn to avoid with this planet.  Now her research was key in saving the human race from itself once again.

She sat at her desk and wondered, again, if it was worth it.  She and her colleagues had argued that abandoning yet another planet wasn't the answer.  There was still time to fix what had gone wrong, to go back to the restrictive measures that had been in place when they'd first arrived on the planet.  They'd taken their case to the people, and asked for a vote.

The results of the vote had been clear.  Not enough of the population was willing to give up the amenities they'd become accustomed to: massively oversized individual transportation, constant climate control...all those things that everyone could do without but would rather not.

She stared through her window at the trail of steam left behind by the rocket as it thrust toward the massive building project orbiting their planet.  Another planet had been found easily enough, and now they were busily building the ships that would ferry the bulk of the population to a clean, new world.  Paige wondered how long that world would last.

They could solve even the most complex problems easily, except the one that caused the most trouble:  human nature.


This post is a response to a surprise prompt from Write On Edge - to use the picture at the beginning of the post to write a short fiction or memoir piece.  We were supposed to write something quickly - tell me what you think in the comments!